The Raspberry Pi 4 Model B has launched. It’s a pretty big upgrade from the Raspberry Pi 3, with the company claiming that the device can provide “desktop performance comparable to entry-level x86 PC systems.”

OK… but how does it perform as a server? Individually, the answer is just about what you’d expect. While the Pi 4B is an enormous all-around upgrade from the 3B+, it’s still a Raspberry Pi at its heart. The former model’s DDR2 RAM has been upgraded to DDR4, the new Cortex A72 CPU is anywhere from double to quadruple the speed of the older A53, and the gigabit Ethernet adapter isn’t hamstrung by a USB 2.0 bus anymore, so it can actually push a gigabit worth of traffic. This is fantastic for a starting-at-$35, passively-cooled bittybox… but it’s still very anemic compared to, for example, a humble i3-8100T. 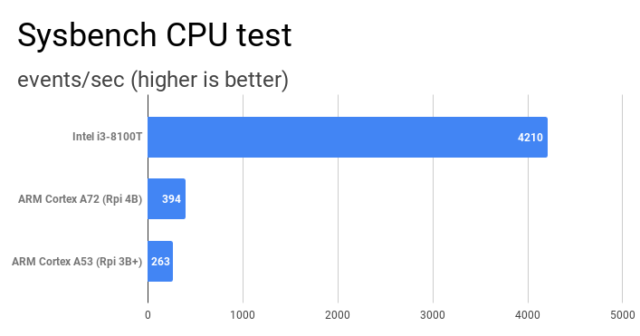 Sysbench CPU is a decent metric for estimating real-world performance. Data drawn from Tom’s Hardware for the Rpi 4B and from OpenBenchmarking.org for the Intel i3-8100T. (credit: Jim Salter)

But where you can’t scale up, you can scale out—and that’s precisely what www.raspberrypi.org has done. The launch site for the Raspberry Pi 4 Model B is mostly running on a cluster of 18 of the little devices themselves. Fourteen handle PHP code execution, two serve static files, and two run memcached. CloudFlare is still handling the brunt of the raw network traffic, though, and the database—by far the heaviest storage load on a WordPress site—isn’t running on the little Pi cluster, either.