Earlier this month, Nvidia kicked a stool out from under AMD’s feet, just as the graphics-card sector began heating up anew. AMD was set to land a serious blow with new RX 5700 cards in the “pricey but reasonable” range—a range that Nvidia had failed to capture with its “entry-level” RTX cards, the 2060 and 2070. Nvidia responded to AMD’s news by unveiling and launching a surprise pair of solid “Super” cards. AMD responded with its own price cut (and a claim that this price-war dance was its plan all along).

As these similarly specced cards jostled for the “$400ish” crown, the winner was ultimately consumers. At every price point, new GPU buyers can expect a solid bang-for-buck quotient between the

Earlier this month, AMD Radeon VP Scott Herkelman tweeted a single, cryptic word: jebaited. If you’re not a big Twitch person, that probably doesn’t mean much to you. Thankfully, Herkelman made it clear for the rest of us a week later, when he appeared on HotHardware‘s 2.5 Geeks podcast to talk about the Radeon 5700 launch.

The first half of the 45 minute interview goes by with Herkelman propping up his gamer cred, then he walks through AMD’s usual talking points about contrast-adaptive sharpening and doing the usual “we love the reviewer community” routine. But about 26 minutes later, HotHardware’s Dave Altavilla asked Herkelman about the tweet—which referenced AMD’s Radeon pricing strategy—and things got more interesting.

You can’t copyright a cocktail, so what’s a creative bartender to do?

NEW ORLEANS—Anyone who fancies themselves a fan of cocktails knows the names: the Manhattan, Old Fashioned, Martini, Margarita, on and on and on. In the drinks world, such recipes have stood the test of time and grown into industry icons over decades. But unlike similar cultural colossuses elsewhere—from Mickey Mouse on screen or “Hey Jude” in the stereo—you can find the Negroni being deployed freely at virtually every bar in America. What gives?

“Can you copyright and own a recipe? A recipe in the eyes of the law doesn’t have that creative spark,” says attorney Andrea Mealey, an intellectual property expert who’s done legal work for beverage companies like Gosling’s Rum. During a panel on IP in the bar industry at the 2019 Tales of the

Hey. So, um, remember the end of Game of Thrones? If you were a fan of the show, you probably do. And there’s a good chance it still stings. Daenerys Targaryen turned into a totalitarian dictator (if that can, indeed, be a thing). Then she died. Then Bran Stark—of all people!—was picked to rule Westeros. His sister Sansa became Queen in the North. And those are just the major plot points, the top of the crap-heap. It was, well, not beloved.

And the people who made that final season know it. To be clear, they don’t entirely agree with the criticisms of the HBO show, they just know there was some blowback. A murderer’s row of fan favorites from Game

Once again, engage: Picard trailer feels like the next Next Generation

All eyes were on San Diego Comic Con’s Star Trek panel this year, as anticipation continues to build for Star Trek: Picard, the first Trek entry to feature Sir Patrick Stewart since the 2002 film Star Trek: Nemesis. And on Saturday, the series’ handlers at CBS didn’t disappoint.

One additional fun reveal came at the event: a new CBS All-Access animated series titled Star Trek: Lower Decks. This series’ announcement did not come with a trailer, but we shouldn’t have to wait long to see more, as Lower Decks is expected to drop in 2020.

Operation Avalanche, the only good conspiracy—fake the Moon landing, get promoted

With this weekend’s 50th anniversary of the Moon landing, it’s worth remembering most conspiracy theories are more-or-less the same: a shadowy cabal of all-powerful, all-knowing elites comes together to manipulate us commoners, for whom they have nothing but contempt. The cabal changes—globalists, Lizard People, the media, the Vatican, whatevs—but the song remains the same.

So a few years back when I heard someone had made yet another a low-budget mockumentary about faking the Apollo 11 Moon landing, that’s what I was expecting. Maybe even Kubrick would be evoked again. Instead, imagine my surprise when 2016’s Operation Avalanche turned out to be light on conspiracy against the sheeple and heavy on a bumbling, baby-faced doofus who comes up with a plan to fake the Moon landing as basically a way to impress his boss.

Psychologists speculate that people are drawn to conspiracy theories because a 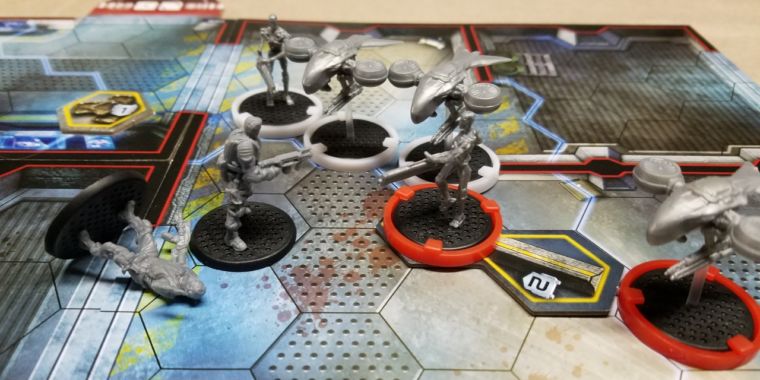 The new Terminator board game is actually worth your time

Welcome to Ars Cardboard, our weekend look at tabletop games! Check out our complete board gaming coverage at cardboard.quickbitetech.com.

Even Terminator has a board game now. In the “golden age” of tabletop gaming, companies and licensing have brought us a wealth of titles, including those that no one was asking for (I’m looking at you, Ghostbusters and Wacky Races). Is Terminator Genisys: Rise of the Resistance something to get excited about?

Pearce’s announcement came via a Friday blog post at Blizzard’s official site, which was appended with a note from current Blizzard president J. Allen Brack. The combined blog post indicates that last year, Pearce “stepped into an advisory role to help with the transition,” which seems to indicate that his departure has been some time coming. It’s unclear whether this advisory-transition period began anywhere near the time another Blizzard co-founder, Mike Morhaime, left the company in October 2018.

The departure of Pearce as chief development officer leaves only one of Blizzard Entertainment’s original co-founders, Allen Adham, at the helm. Adham returned to Blizzard in 2016 after a ten-year game-development hiatus to become the company’s senior vice president. Adham, Pearce, and Morhaime founded

In a Reddit AMA yesterday, Google Stadia Director of Product Andrey Doronichev provided a few more tidbits about what features will and will not be available when the streaming game service launches in November. But as he did so, he had to convince some skeptical potential customers that Stadia won’t end up in the same corporate graveyard as many other Google service experiments.

Doronichev compared Google’s commitment to Stadia to services like Gmail, Docs, Music, Movies and Photos, which have persisted for years with no sign of imminent shutdown. “We’ve been investing a ton in tech, infrastructure, and partnerships [for Stadia] over the past few years,” Doronichev said. “Nothing in life is certain, but we’re committed to making Stadia a success… Of course, it’s OK to doubt

This week marks the launch of Sky: Children of Light, a game from famed designed Jenova Chen and beloved studio thatgamecompany, on iOS devices. Intended as an entry point to gaming that upends conventions and seeks new ranges of emotional expression, Sky was revealed during Apple’s iPhone keynote in 2017 as a mobile-first game and an iOS exclusive at launch.

The game is expected to arrive on Android, Mac, Apple TV, Windows PC, and consoles sometime in the future, though. Its initial wide launch this week follows a long soft-launch period and a launch-date delay as the game went through some big changes in testing to get its social aspects—a key part of the experience—just right.

In Sky, you play as a nondescript, child-like being who walks and flies through varied 3D environments collecting light,