With all attention focused on the plummeting prices and soaring popularity of solar and wind, geothermal energy is probably under-appreciated. Sure, you might think, it’s great where you can get it—in, say, Iceland or the Geysers area of California—but those are exceptions, right? Not entirely. Geothermal power sources come in many forms, and they’re typically much more subtle than steam shooting out of the ground. In reality, geothermal energy could be a big player in our future mix.

That is made clear by the US Department of Energy’s recently released “GeoVision” report. The report follows similar evaluations of wind, solar, and hydropower energy and leans on information from national labs and other science agencies. It summarizes what we know about the physical resources in the US and also examines the factors that have been limiting geothermal’s deployment. Overall, the report shows that we could do a whole lot more with geothermal energy—both for generating electricity and for heating and cooling—than we currently do. 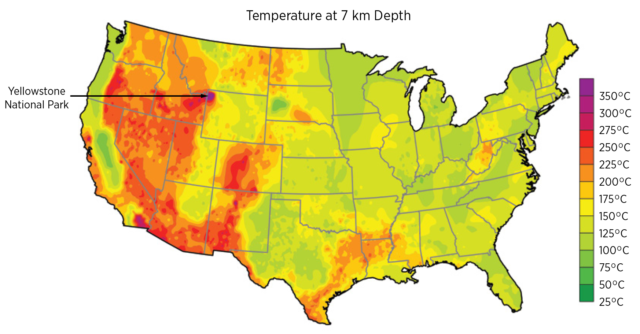 The highest temperatures are found out West, but these aren’t the only places where geothermal techniques can be applied. (credit: DOE)

There are opportunities to more than double the amount of electricity generated at conventional types of hydrothermal sites, where wells can easily tap into hot water underground. That’s economical on the current grid. But the biggest growth potential, according to the report, is in so-called “enhanced geothermal systems.” These involve areas where the temperatures are hot but the bedrock lacks enough fractures and pathways for hot water to circulate freely—or simply lacks the water entirely.