Star Trek fans briefly turned into Internet archaeologists today after CBS posted, then quickly took down, the first trailer for Star Trek: Picard. Earlier this morning, Entertainment Weekly appeared to have taken down a story about the reveal, but luckily for everyone else the trailer still showed up in Google results as “Star Trek: Picard first trailer released.” (And this being the Internet, of course, mirrored versions of the trailer soon existed everywhere, showing us the first public glimpse of a show that was last teased at CBS’ Upfront presentation in March.)

With rampant unofficial footage of the captain officially out of retirement, however, CBS soon righted the ship and debuted the teaser via the @StarTrek Twitter feed, noting it comes on the anniversary of The Next Generation‘s series finale.

25 years ago today, ‘All Good Things’ brought us to an end. 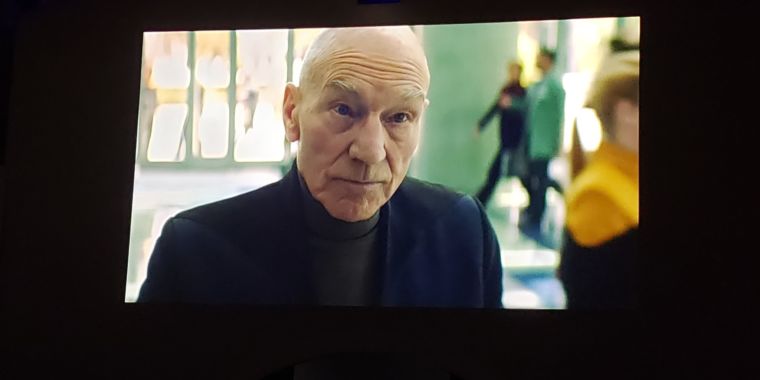 We now have our first look at Patrick Stewart in character as Star Trek: The Next Generation‘s Jean-Luc Picard since the film Star Trek: Nemesis back in 2002.

The image is a photo of a video clip shown at CBS’ Upfronts presentation. Upfronts are hosted by TV networks like CBS to show off the next season’s slate of shows primarily to advertisers, but sometimes to press as well. Press and advertising professionals who presented at the event shared the details on Twitter. The image itself was shared by Kate Aurthur, Buzzfeed’s chief Los Angeles correspondent.

Pittsburgh Post-Gazette TV critic Rob Owen described the brief scene in a tweet, writing that the clip featured “a Starfleet officer asking Jean-Luc, ‘May I have your name, please, sir?’ as Picard appears incredulous.”