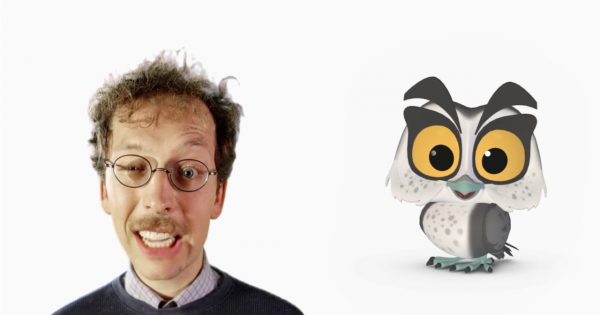 Puppets, adorable 3D emoji that are similar to Apple’s Animoji, are now available to users of SwiftKey Beta.

Just like Animoji, you can choose from five cute animals to mimic your face’s own movements, which can then be sent to friends. You can currently choose between a dinosaur, panda, cat, owl, and dog.

Your recordings are saved as video which can be shared, which isn’t quite as fluid as Apple’s Animoji experience. Damn you and your smooth experience, Apple.

At first I thought this may be an April Fool’s joke, but I checked the calendar and … Read the rest 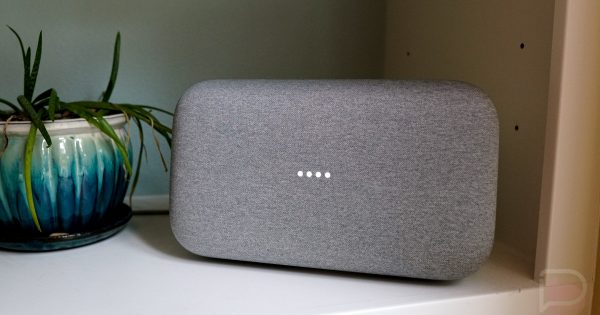 Home Max, Google’s fancy audiophile-focused and Google Assistant-powered speaker is available for just $209 on Rakuten with the assistance of a coupon code.

To score the savings, add the speaker to your cart, enter in the code, and then bask in the powerful sounds of Home Max. 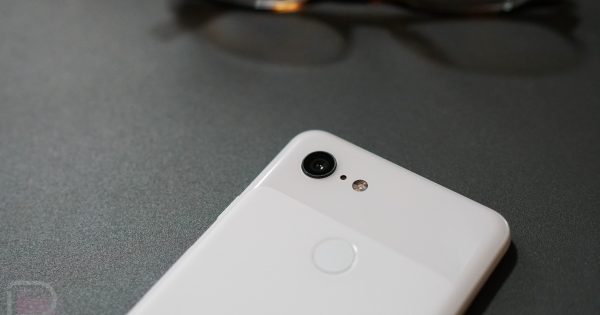 We learned today that the Pixel 4 and Pixel 4 XL will likely have a telephoto camera on their backsides for the first time. While that addition doesn’t surprise me, it got me curious if that’s the option that most phone owners would prefer, the other option being an ultra-wide shooter.

After running a mini poll on Twitter that garnered a mix of responses, it’s time for a poll here. The question is a simple one, but I’d love to know your reasoning. Would you rather have a secondary camera on a phone that’s a telephoto lens or an ultra-wide?

Note: There is a poll embedded within this post, please visit the site to participate in this post’s poll. 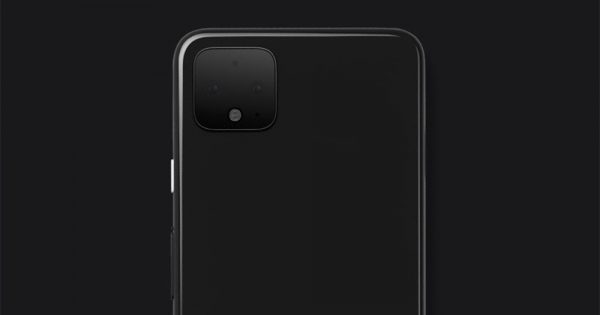 Thanks to an early outing of the Pixel 4’s camera by Google, we know that Google’s new phones will have more than one camera on their backsides for the first time. Speculation over what that camera might do covers everything from ultra-wide shooting to the zoom or telephoto action we’ve seen from various smartphone makers. The latest Google Camera app may have confirmed that it’ll be the latter.

The folks at XDA dug into Google Camera 6.3 from an early release of Android Q Beta 5 and found “telephoto” references in a couple of places. The first was in relation to Google’s Super Res Zoom, as if the Pixel 4 with a telephoto lens may be able to take advantage of that AI magic. The other is a straight-up sensor ID called “GCAM_SENSOR_ID_REAR_TELEPHOTO.”

In an upcoming build of Google Camera for Pixel owners, version 6.3 to be exact, a few changes are happening.

Detailed by 9to5 Google earlier this week, one big change in 6.3 is the moving of home location for Google’s Night Sight mode. This is the night shooting mode that blew minds last October when first debuted. Previously, the mode was kept inside the More tab, but in 6.3, it takes Panorama’s position as a main feature alongside Photo, Video, and Portrait.

Congrats on the promotion, Night Sight.

Hidden inside of 6.3’s code, something called McFly mode is hinted at, though, the feature isn’t enabled in the build. The code also references “rewind,” which could mean the mode is to be used for shooting video that’s supposed to be viewed backwards. That’s speculation and we don’t expect the mode to actually … Read the rest 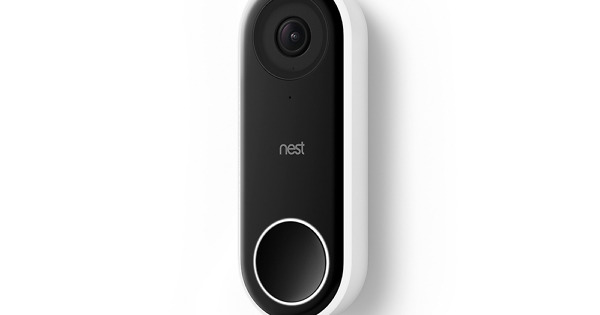 4th of July deals are still in full swing, so that means gems like $60 off the Nest Hello video doorbell are happening.

B&H Photo is the host of this deal, which as far as I can tell, is the best deal anywhere at the moment. Actually, for $169, this might be the biggest deal yet on Nest and Google’s doorbell.

As a recap, this video doorbell records at a resolution of 1600×1200 with HDR, night vision, IPX4 rating, 160-degree viewing angle, speaker, and microphone. Both Tim and I have this doorbell and it is fantastic. The video quality is great, it connects well to WiFi and holds that connection, and it’s pretty easy to install. 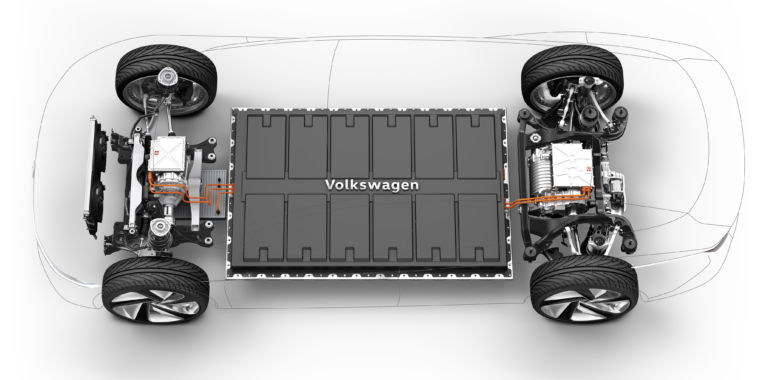 On Friday morning, Reuters reported that the collaborative alliance between Ford and Volkswagen is to deepen. Back in January, the two car makers announced plans to share technology and platforms, starting with new commercial vehicles like vans and medium-sized pickup trucks. At the time, there was much speculation as to whether VW would also give Ford access to its new MEB architecture, a parts bin and toolkit for building electric vehicles.

Although Ford was an early leader in hybrid technology, in recent years it has lagged behind other large automakers when it comes to electrification, particularly VW (which has a highly aggressive plan to build battery EVs at scale). When the initial partnership was announced, it was not therefore surprising 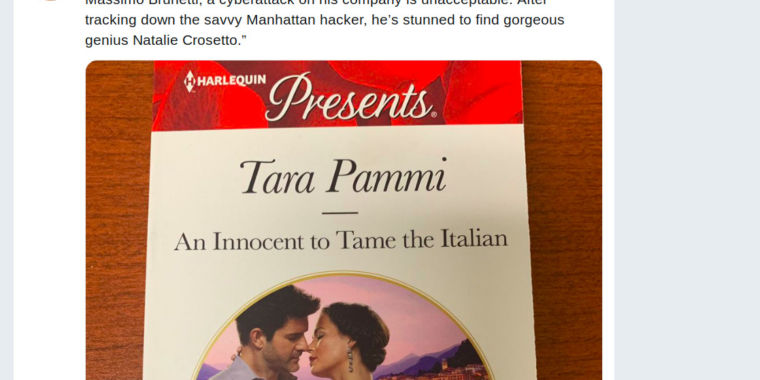 This week, my wife and favorite librarian Paula brought home a new acquisition specially for me: An Innocent to Tame the Italian, a recent book from the Harlequin Presents imprint. Author Tara Pammi’s previous books—which include Sicilian’s Bride for a Price and Sheikh’s Baby of Revenge—share a somewhat politically incorrect leitmotif of foreign sexual intrigue. If you’re wondering: no, romance novels are generally not my speed.

But the back-of-the-book tease for this work declared otherwise:

For brooding tech billionaire Massimo Brunetti, a cyberattack on his company is unacceptable. After tracking down the savvy Manhattan hacker, he’s stunned to find gorgeous genius Natalie Crosetto. Yet naive Nat isn’t the saboteur. To uncover who she’s protecting, Massimo returns to Italy—with Nat playing his fake fiancée! But this untamable Italian might have met his match in innocent Nat, who challenges him… and tempts him

Adding to the steaming pile of unsubstantiated hype over probiotics, the New York Times ran an uncritical article this week suggesting that a probiotic of heat-killed bacteria can treat obesity.

Of course, the data behind the story does not suggest that. In fact, the study is so small and the data so noisy and indirect, it’s impossible to come to any conclusions about efficacy. There’s also the nit-picky complaint that the study deals with dead bacteria, while probiotics are generally defined as being live bacteria. More importantly, the study was authored by researchers with a clear financial stake in the treatment succeeding. They hold a patent on the treatment and have started a company based on it—two details the New York Times seems to have forgotten to mention.

In many ways, the study is pretty typical of those